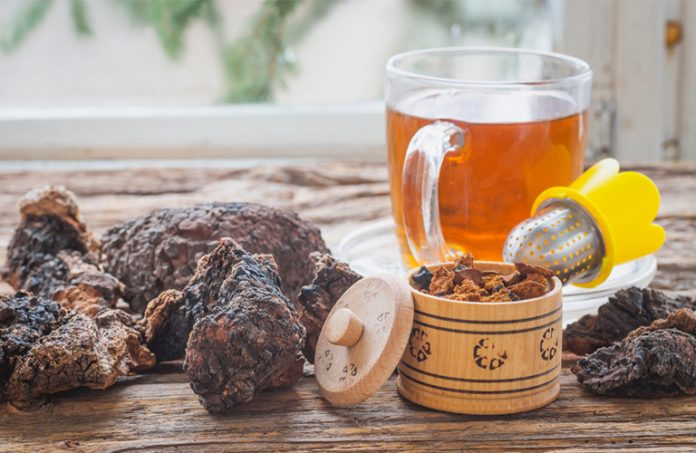 Wondering how to make Chaga tea? Well, this blog will show you how to do that and you will also learn its medicinal benefits. This medicinal mushroom is one of my favorite herbs and I am sure that this might be one of the most incredible things you are ever going to ingest into your body. Chaga tea preparation is actually very easy and inexpensive. Aside from taking Chaga mushroom supplements, I would highly recommend that you try this out to see how good Chaga tea really is. 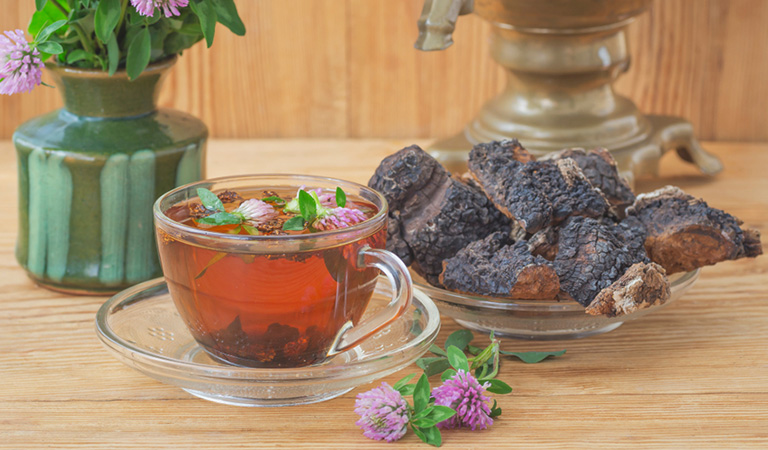 You can use the Chaga mushroom powder form that is commonly available on the market but here I am using chunks of Chaga. If you find a big chunk of Chaga, you need to break it into smaller chunks. Then you have to pour a two-thirds cup of water in a pot and put a handful of Chaga chunks into the water.

After that, you need to simmer it for about three hours. This will break down the cell walls of the Chaga and allow the polysaccharides and immunological substances to be released into the water, which will eventually work like weaponry inside your body.

If you are interested to take it to another level for more potency, you need to freeze the liquid overnight after simmering. Then you have to simmer it again for another three hours on the following day. Basically, this will help to bust open the cell walls more as the water will expand more when it will freeze. This way you are going to get the maximum effectiveness out of your Chaga.

You probably have tried a few mushroom recipes to get optimum health benefits. But if you want more potency out of your Chaga tea, I would recommend that you first simmer it, then freeze, and then simmer again because the tea becomes more potent when simmered more than once. But if you are in a hurry, you have no other option than following the three-hour method stated above.

Once you have finished simmering, you can strain the water to use the liquid to drink your mushroom tea Chaga. You’ll find this mushroom tea with a dark color that generally comes from the betulin and betulinic acid. These are the compounds that are found in the outer darker part of the Chaga mushroom.

Tips: Do not throw away the chunk that has already been boiled because those same batches of Chaga chunks can still be used around five times or even more. With a handful of Chaga chunks, you should be able to get several rounds of strong, rich, and dark brown mushroom tea Chaga, which is a great source of herbal medicine for your body. You also shouldn’t use the same chunks anymore if the water doesn’t change color. When the water appears to be clear then you will know it’s time to throw away those chunks and make yourself some new ones. 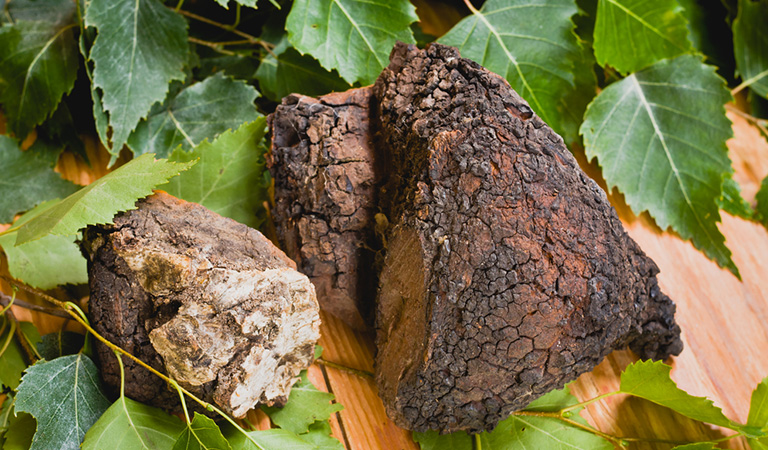 Let us now see what makes Chaga mushroom so popular and an incredibly powerful herb that has lots of benefits for us.

Chaga mushrooms grow primarily on birch trees. It grows in the northern regions of the world in colder climates. So, you will find them in places like Canada, the northern areas of the US, places like Maine, for example. Also, you will find it in Siberia, Korea, and in some parts of Europe. However, Chaga mushrooms are often found growing on trees, unlike the regular nutritional mushrooms that generally grow on the ground and you probably use them in cooking for their medicinal benefits. 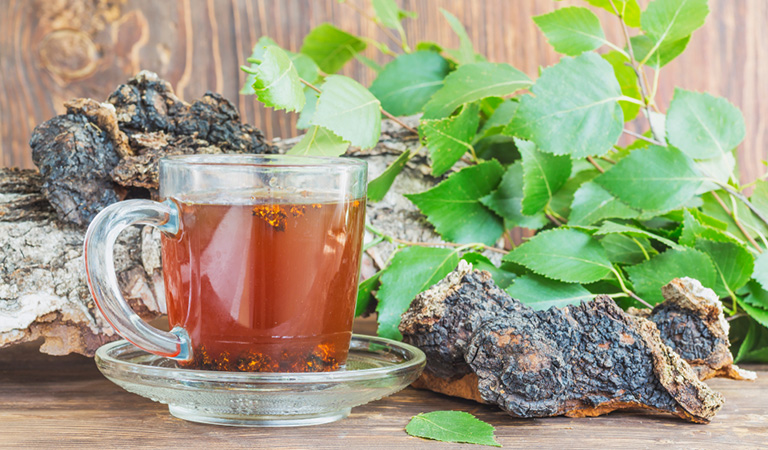 For my Chaga mushroom tea recipe, I am going to stick with the immunological benefits because it consists of a compound called beta-glucans. These are a form of polysaccharide, which is a long-chain sugar molecule. When it enters into your body it gets broken into smaller pieces by the white blood cells and gets attached to them. In essence, they actually teach your white blood cells how to do their job better. You can actually consider this as an operating system upgrade for your immune system. It gives your immune system a whole new set of tools to work with, which is really amazing.

If you take a bite out of this mushroom and eat it, it will taste like you are trying to eat a piece of wood. You can chew it to eat it and probably digest it, but you are not going to get any nutritional value out of it. Because it has cell walls made up of Chitin, which is one of the hardest substances in nature, it is hard to break rather than chewing or digesting it by the enzymes in order to get its nutrition.

Making a tea out of Chaga will primarily let you extract the immune-active components from it. But you need to extract the mushroom in alcohol to get more of its adaptogenic compounds.

Research and Studies on Chaga Mushroom: 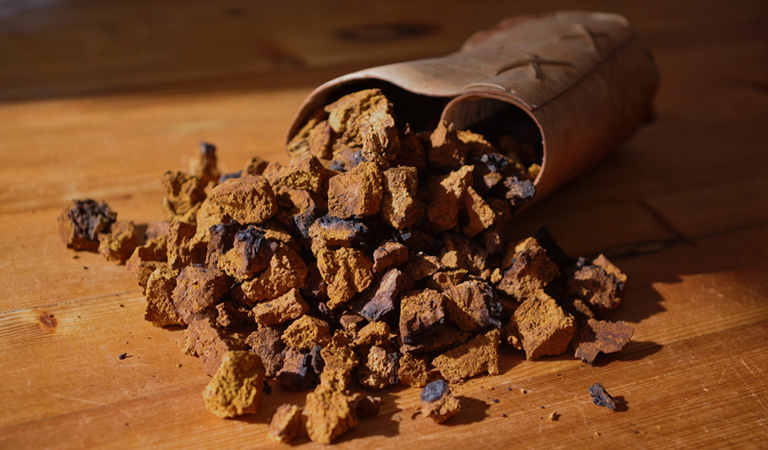 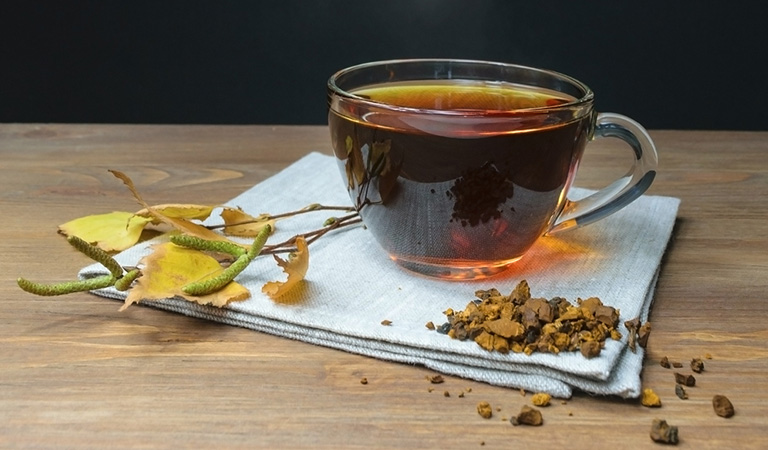 To sum this blog up, let me give a final touch. This is my little secret that will help take the flavor and experience of this organic Chaga tea to the next level. Just add a couple of drops of vanilla stevia to enhance the flavor since Chaga actually contains vanillic acid on its own – one of the factors that make Chaga better than Reishi. I am recommending you to enjoy this flavor as I like it so much! Whether you’re drinking this as a hot drink or as an iced tea, the taste will always be amazing no matter how and when you drink.