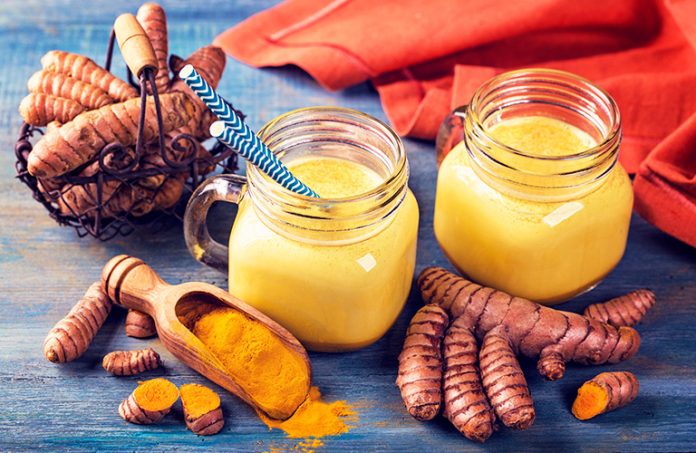 When we think of Indian food, we think of foods like biryani, curry, samosas, tandooris, butter chicken, etc. But you may have noticed that they all have one thing in common- they all have those bright orange shades of turmeric. People from Asia, Africa, and Middle Eastern regions love turmeric and like to use it anywhere and anyway they can. Although turmeric is not a widely used spice here in the USA, you can incorporate it into some recipes and see the differences in both taste and your health condition.

Turmeric has been used in Ayurvedic medicine since the ancient times and has slowly seeped into Western medicines due to its anti-inflammatory, antioxidant, antibacterial, and other medicinal properties. There have also been some promising studies on the healing effects of turmeric in various conditions and disorders. This is exactly why you should include turmeric in your diet. Don’t limit yourself to curries, you can make these simple recipes using turmeric and spice up your eating habits. 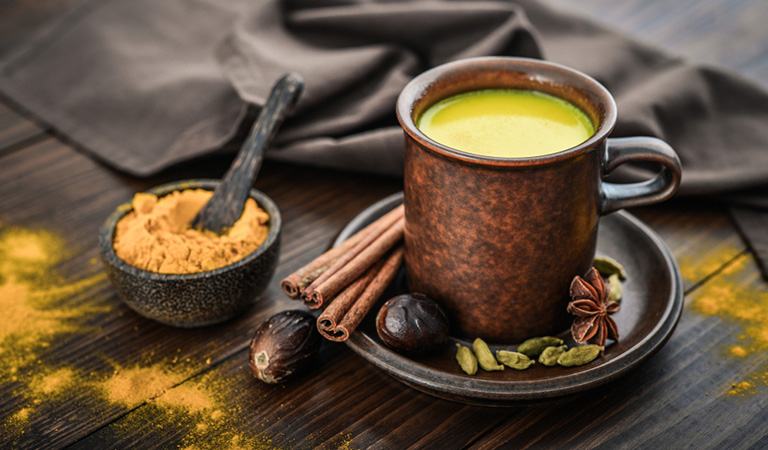 Turmeric is a close relative to ginger, but unlike ginger, it’s flavor is not so strong. One of the most popular and easy recipes made using turmeric is tea! Unless you are allergic to turmeric, you can safely drink turmeric tea without facing any side effects. It’s also called ‘golden milk’ or ‘turmeric latte’ by some people. The benefits of turmeric with milk are acknowledged by Indians. You’ll often see them having turmeric or ginger tea when they catch colds or have fevers. Even Gwyneth Paltrow sips on turmeric tea every once in a while when she is not around ‘Iron Man,’ if you know what I mean. Here’s how you can get those turmeric tea benefits that people have been obsessing about.

You have to blend chopped ginger and turmeric, coconut oil, coconut sugar, and sea salt. Also, start heating the almond milk until it simmers. Then pour the milk into the blender and repeat the blending process until it appears to be frothy. Pour it into a glass and serve with black pepper garnishing. Try to drink this tea regularly and you’ll soon notice a positive change in your skin as well as your overall health condition. Turmeric tea benefits also include improved digestion, memory and so much more. 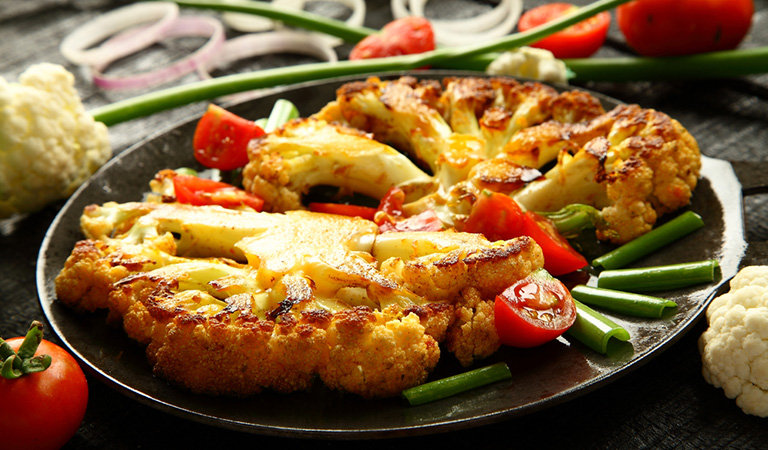 This recipe is a nod to the Indian style of roasting and cooking vegetables, but with a touch of Western originality. Rest assured, this recipe is not as spicy as you are making it out to be.

Take the cauliflower, strip off its leaves and trim the ends of the stem. Take a knife and cut it into three pieces from the top part to the base. These parts are what we call steaks. Add salt and pepper evenly to the steak on both sides. Heat 1 tablespoon of olive oil on medium heat in a skillet. Ensure to sear those cauliflower steaks until they turn golden on each side. Keep the steaks on a baking sheet. Then preheat your oven to around 400 degrees F.

Now mix 1 tablespoon of olive oil with cumin, turmeric and ginger, and apply the mixture all over the cauliflower steaks. Place the steaks in your oven and heat for 15 minutes. Once it’s roasted you can serve it with cilantro. 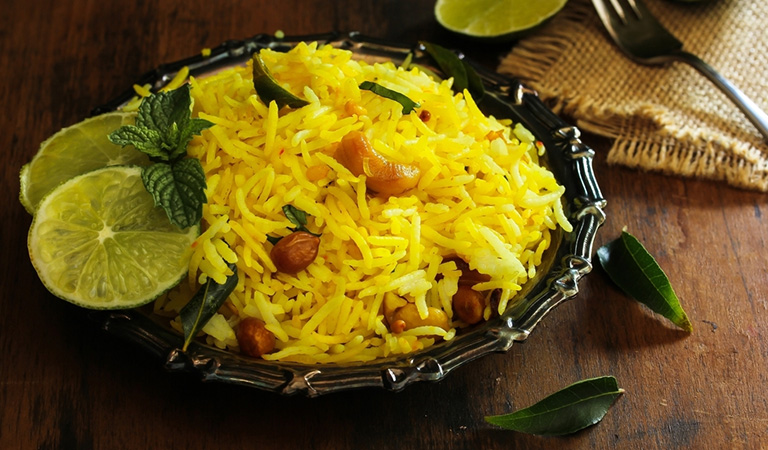 Indians usually eat rice with curries containing pinches of turmeric. Basmati rice is one of my personal favorites, so I’m sharing a recipe that could be a part of your turmeric diet. But don’t forget to use turmeric masks and scrubs to beautify you.

Mix all these ingredients except cranberries into a small pot. Cover the pot and boil the mixture. Once the mixture reaches boiling point, reduce the heat to allow simmer and then cover again. Ensure the rice has absorbed all the liquid. This process could take approximately 15 minutes. Just before the rice finishes cooking, add cranberries for flavor. Again place the cover and allow more cooking. Check the flavor and taste of the rice and add more salt if needed. Use chopped cilantro and nuts for serving. 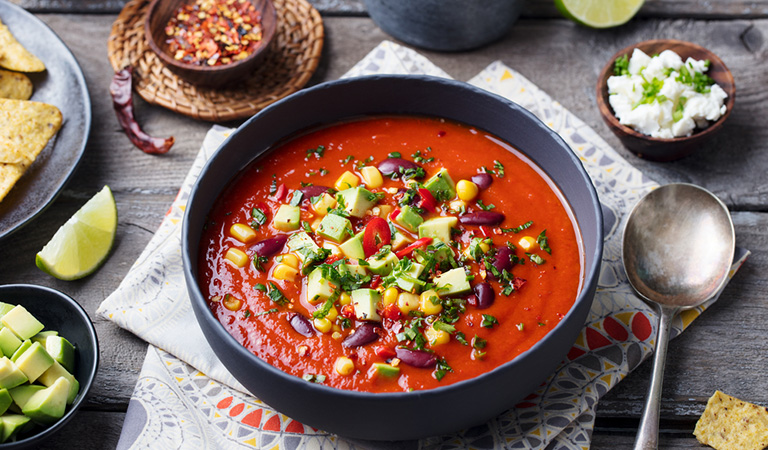 As part of your effort to gaining all the possible turmeric health benefits, your turmeric diet should include a stew as well. So, what could be better than the red lentil stew with the touch of authentic Mexican style of cooking? Here’s how you can make this tummylicious recipe.

Take a medium pan and pour the dry red lentils and water into your pan and rinse. Cover the pan and drain away as much water as possible. Repeat this process a few times, until the drained water looks clean enough. After draining for the last time add 4 cups water and cover the pan. Bring the lentils to boil and once boiled, allow the lentils to stay put for around 20 minutes.

Take a separate large pan and prepare the stew. Saute the onion and garlic in olive oil until they look transparent. Then add celery and saute it as well until its soft. Add tomatoes with the juice, cumin, chili powder, turmeric, and hot sauce. Stir to mix well. Then drain away the water from the lentils and add lentils to the large pan with the stew. Now add vegetable broth and stir for a while. Allow the stew to simmer at medium heat for 15 minutes. The lentils will become soft and make the stew appear thicker. Add the cilantro leaves and squeeze lime juice into the stew. Now taste the stew and add more sauce or salt accordingly, if needed. 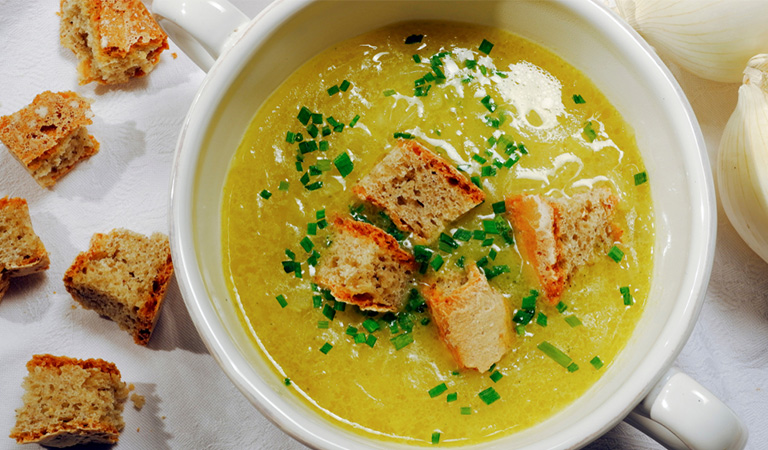 I tried to include four different type of recipes here so you have the chance to experiment with turmeric. However, to enjoy turmeric health benefits, you can even try turmeric supplements. You can add a pinch of turmeric even in normal milk or scrambled eggs to add distinct flavors. By incorporating small pinches of turmeric along with black pepper in everything that you eat, you can get the full effects of curcumin in your body for a healthier body and better living.